Does Night Light Save Battery? (Tips on How to Sustain Battery Life) 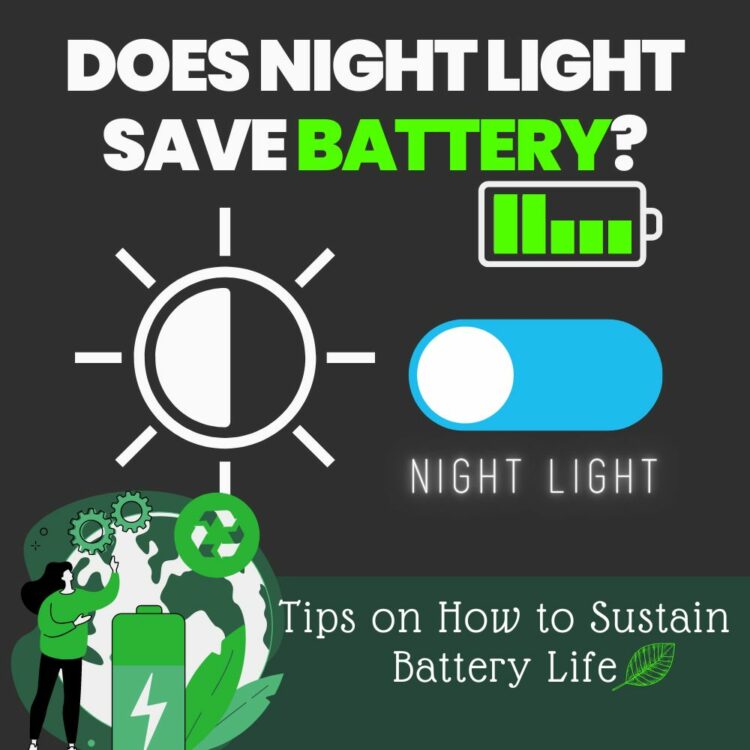 This article answers the question "if night light saves battery". In addition, it offers tips on how best to prolong battery life.

With the advent of smartphones and other ICT communicative gadgets, one of the most important requisites customers consider is the longevity of the batteries that come alongside their devices.

Does the night light feature on many modern devices save battery? The short answer is yes, but there is more to it than what meets the eye.

Now more than two decades after the first smartphone was invented, the dark mode setting has become an increasingly popular battery-saving feature in smartphones and computer gadgets.

All modern mobile devices with a screen use one of two display technologies– OLED and LCD. They are the most popular displays available.

OLED or better known as organic light-emitting diode screens have self-emissive pixels. This means that the pixels on an OLED screen can generate their light visibility when an electric current or wave is passed through them. So they do not need a backlight to create pictures and text.

In addition, when an OLED screen has to produce the black color for visibility, it simply turns off pixels in the required part of the screen, and what is produced is an entirely black color. And by that, it takes less power, and your device’s battery lasts longer.

However, the impact on the battery life will depend on how often parts of your device’s screen are entirely black.

An LCD, on the other hand, or as they are best called, “liquid crystal displays,” requires a backlight, typically LEDs or Mini-LEDs, to project the pixels to produce pictures and texts.

Hence, when an LCD creates a black color, it has to block the backlight in areas of the screen where black is needed. Nonetheless, aside from the screen tech, the background color used by a platform or a running app while the dark mode is enhanced can dictate if you will see any benefit on the battery front.

As highlighted earlier, all OLED devices can switch off the pixels. In addition, some LCD devices can dim part of their backlighting to display the black color. This aids in conserving power and elongating the battery life of a smartphone, ICT device, laptop, or iPad.

A lot of things can result in damage to the health of your battery. Despite how much you use it, even the best batteries in mobile devices, laptops, and iPads are not made to last forever.

All batteries have a certain life expectancy, measured in charge cycles. This connotes that they can be fully charged and discharged for an allotted time. Some of such factors that kill battery health include the following:

Those and many other factors can be responsible for the damage to battery health. These factors cut across various specs and tech models of smartphones, laptops, and other technological accessories.

Is Fast Charging Better Than Slow Charging For Battery Health?

Most often than not, device users prefer to have a faster charge as such saves time and affords them the time frame to execute tasks on their devices promptly. Recently, device users have opted for more rapid chargers that help prolong the lifespan of their batteries.

Fast charging makes it easier to boost your battery when you need to. Considering the increasing amount of time, we spend on our smart devices and other ICT gadgets and how it is becoming difficult for a single charge to last all day, fast charging is more essential than ever.

Also, notably, with fast charging comes the issue of heat, which is associated with high amounts of power aimed at accelerating the pace of charging.

Such heat is bad for battery life. Hence, fast charging devices strive to reduce the heat as much as possible while maintaining a fast charge.

On the other end, slow charging is not desired by mobile device users and other gadget owners. This ultimately results in a longer time spent charging.

In most cases, it results in swelling the battery of devices. Which eventually shortens the lifetime of a battery. In the long run, most users would opt for a faster charge when using their mobile devices or gadgets.

Tips On How To Sustain Battery Health

These handy tips are best suited to sustaining the battery life of your smart device, laptop, and other electronic gadgets. Considering that our reliance on technology has increased over time, it is no surprise that the batteries of our laptops, smartphones, and tablets might conk out quickly.

This is essentially due to the frequent usage of these devices in various capacities. Here are tips on how best to squeeze more life from your battery and secure more time with your tech.

Step 1: Use of power-saver mode

Critically, by engaging the power-saver mode or option on your device, this feature conserves battery power by limiting CPU performance.

Certain apps pose threats to battery life. These apps should be flagged off when they are not in use.

The environment that cohabits with your smart device or gadget should be kept at a favorable temperature to avoid overheating your battery.

Step 5: Adherence to voltage requirements for your battery

All batteries have their required specs for voltage input and output. Such specs should be maintained at all times.

Unauthorized app updates on devices often or do not keep the operating system of such devices running. And as such, in the long run, it damages the battery’s health. Turning off automatic updates will further prolong battery life.

For power-consuming apps, every device user should ensure that these apps are moderated by regulating their power-draining capacity on the device itself.

Those tips come in handy in prolonging the lifespan of your battery. Careful adherence to some of them will ultimately enhance the longevity of your battery health
.

With the increasing satisfaction that tech brings, device users make a conscious effort to ensure that they look after the health and performance of batteries that power their gadgets. Of course, there is no guarantee on how long a battery should last. However, proper monitoring of its usage and draining capacity would go a long way in safeguarding its health status in the long run.

How to Track Location By Cell Phone Number? (Best Tools and Spyware)

How To Fix The “Connection Was Terminated By The Remote Computer Before It Could Be Completed” Error? (6 Solutions!)