How To Fix The “Unexpected Kernel Mode Trap” Error (Solved!) 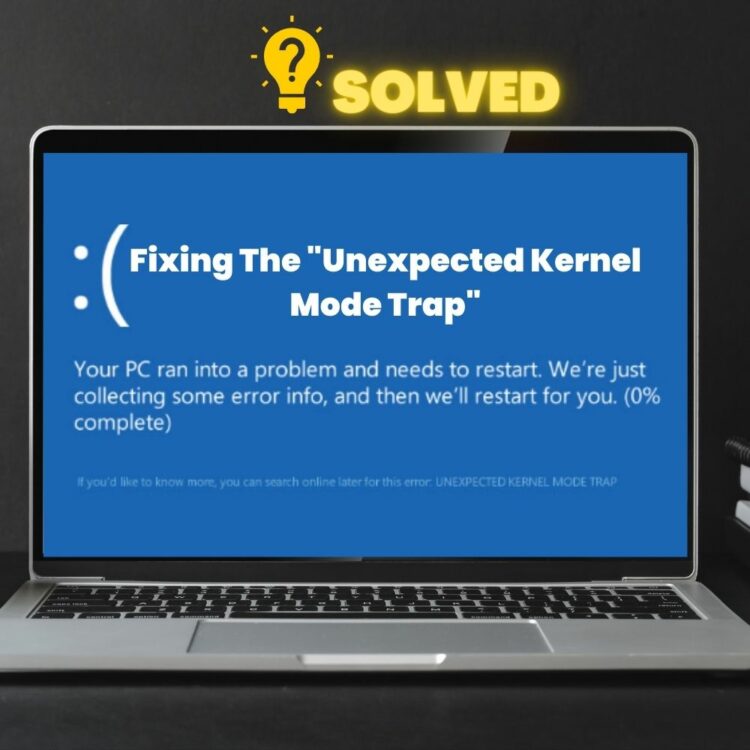 How can one fix the "unexpected kernel mode trap" error? This article explains this in detail and answers all the questions you have.

Nothing gets worse than a black screen. And in this case, it comes in the good ol’ blue bloom. The “unexpected kernel mode trap” error commonly rises from the CPU, propelling an undecipherable file into the kernel. There could also be some bad issues with the hardware or even the software functioning.

All in all, getting nudged into an issue like this is not a place many will want to find themselves. And if you are here already, the only way to go is forward. Generally, the “unexpected kernel mode trap” issue impacts systems with Windows 10, 8.1, and 8 OS. But more often, the issue prevails in Win 10.

Some common symptoms of this error message are sudden shutting down of the system, unexpected freezing, or just any more annoying indications. Nonetheless, solving the issue only need a bit of mouse clicking and keyboard clicking here and there. You don’t need to be tech-savvy. So, to save the day, you can try cleaning out the dust from your hardware or run anti-malware scans.

It could also help to check out your driver and RAM or just tweak a few settings in your system. This guide will discuss some quick fixes shortly below. Hence, do follow through with these step-by-step solutions.

Most of the fixes given below are often enough to clear most issues, but before diving into them, it could help to consider some essential solutions first.

Take your time examining this possibility. All you have to do in most cases is uninstall your driver and reinstall it, try rolling it back to a previous version or update it.

Now, if you’ve tried all the immediate fixes above, and the blue screen isn’t giving way still, it might be time to bring on the big guns. Below we’ll look through some solutions that sure could prove themselves key.

Solution #1 — Check Out The New Hardware And Software

It’s common for most Windows issues to come up only after a change in hardware or software. So, if the “unexpected kernel mode trap” came into play after a new addition, you should try shaking up things a little bit.

If you cannot clear the issue even after applying these solutions, do move on to the next one below.

Malware attacks are never good. They could get malicious, tricky, and, worse, fatally dangerous to your system’s health. These attacks have a habit of coming in different disguises, so it will be best to investigate if you don’t already have a virus issue in your hands.

You can get fairly decent and reliable anti-malware software scans online; if you prefer, you could install one as an application. Often, the latter saves you more stress. Technically, a good scan will help eliminate the error if a malware attack causes it. And if it doesn’t, then do try out the next fix.

A compatibility issue could have come up with your RAM. For example, if you just added a new RAM, it might not work well with the other units of your system. In other cases, the issue might have arisen because of a dual RAM issue complication, or something might have gone wrong with your RAM’s memory.

Running The System File Checker (SFC) command could help if you cannot use your system at all. To do this:

What Are The Causes Of The “Unexpected Kernel Mode Trap” Error Issue?

The screen could have gone blank with the error response for several reasons. It could be that a new RAM is being added and has a compatibility or memory issue. You could also suffer from a malware attack; even worse, some of your hardware sucks and needs a change.

In some situations, however, the cause could be too much dust clogging up the airway of your hardware. Or maybe your driver has an installation issue. So, the issues could have been caused by something so minor and something so nasty. Nonetheless, you should know running a few program fixes could solve even the worse of most causes.

The “Unexpected Kernel Mode Trap” issue is certainly not the easiest error to deal with, but it can be overcome. So, try to run checks through your drivers and hardware to get your perfect fix, as explained in the solutions above. And if you are confused about anything, it helps to try to go over it again, just a bit more carefully.

What is caused by the “Unexpected Kernel Mode Trap” error response?

A not too exciting blank blue screen often makes it hard to get anything done. Sometimes, your system acts up suddenly, stiffening or going off.

How do you fix the “Unexpected Kernel Mode Trap” error response?

Running an anti-ware scan, uninstalling and reinstalling your drivers, running a check through your RAM and other new hardware. To get a more in-depth explanation of these fixes, it helps to go through the guide above.

How To Check if Your Phone is Hacked (Simple Codes Revealed!)

What is Shroud for Power Supply Unit (Explained for Beginners)