How to Mount EXT4 Windows? (2 Solutions!) 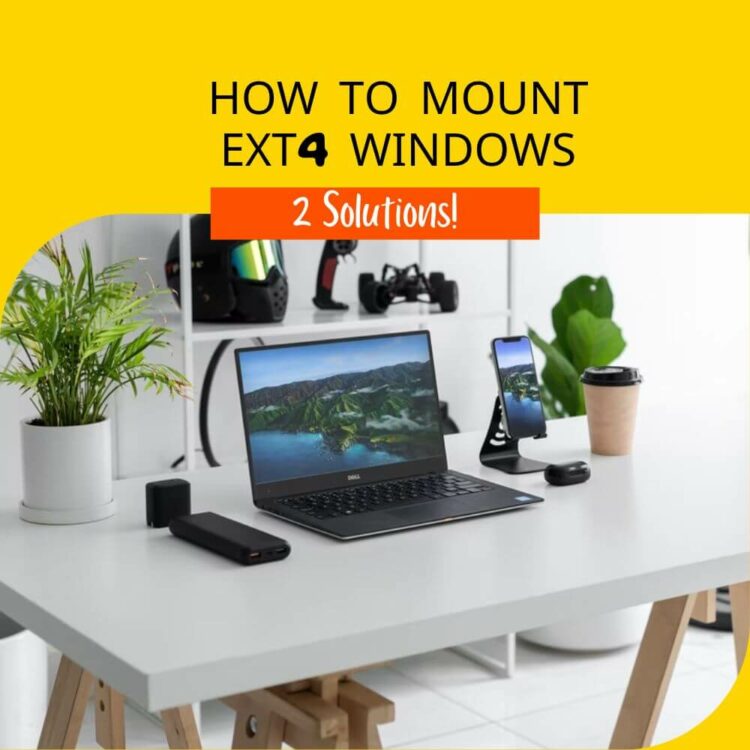 If you want to access files from a Linux system on Windows, read on to find out how to mount EXT4 in Windows!

Have you recently switched from Linux to Windows? You’ll probably want to access your Linux files from your Windows system. Even though Linux supports Windows NTFS partitions, Windows cannot read Linux partitions without using the Windows Subsystem for Linux or third-party software.

Today, we’ll discuss what EXT4 is and how to mount EXT4 drives on Windows. Then, we’ll outline how to use the Windows Subsystem for Linux and look at reliable software you can use to mount an EXT4 drive on Windows.

EXT4 is a popular journaling file system for the Linux operating system. EXT4 is significantly improved over EXT2 and EXT3, with improved reliability, security, performance, and features. Large hard drives commonly use EXT4, but this file system can also be used on removable disks such as memory cards, USB flash drives, and pen drives.

Linux supports many file systems, including EXT2, EXT3, EXT4, JFS, XFS, and BTRFS, with EXT4 as the default. To migrate from Linux to Windows, you might have to format your device’s internal or external hard drives so the Windows system will recognize them.

Solution #1: Mounting with the Windows Subsystem for Linux (WSL)

Microsoft has not automated this process, which requires double-clicking on the drive. Therefore, to use these drives, Windows 10 requires users to manually identify the storage device and mount it using commands. Here’s what you need to mount an EXT4 on Windows:

Now, look at the steps for mounting EXT4 on Windows on WSL.

Third-party programs for this file system are no longer necessary now that the Windows Subsystem for Linux can support mounting an EXT4 drive. However, users running Windows 10 Home will be unable to use WSL due to a lack of Hyper-V support. Here are third-party programs that can help.

This program also allows users to mount any Linux drive, including EXT 2, EXT 3, EXT 4, XFS, and BTRFS, and use them like a Windows NTFS drive.

EXT2explore is a free, open-source program that can only read EXT2, EXT3, and EXT4 partitions. This program does not require installation; download the.exe and run it. However, the program needs to run as admin, or an error will pop up.

This is accessible via the right-click menu. Next, open the file’s properties window and check the Compatibility tab for the “Run this program as an administrator” option.

If you’re looking for a free application, EXT2SFD is one of the best options. It will allow users to mount all types of Linux partitions on Windows. In addition, users can access EXT2, EXT3, and EXT4 drives and also read and write data to these drives. These drives can also be configured to be mounted automatically on Windows startup.

Windows won’t recognize EXT4 files. The Linux operating system supports EXT4 files and extensions such as EXT2 and EXT3, but Windows does not. As a result, they are not detectable or readable on your computer. However, you can make it possible by implementing the solutions discussed in this post.

The Linux operating system’s default file format is EXT4, whereas Windows’ file system is NTFS. However, when it comes to performance, you should test them on the native OS because their performance on the respective operating systems is excellent.

How To Fix "Err_NetWork_Changed" Error in Google Chrome (5 Solutions!)