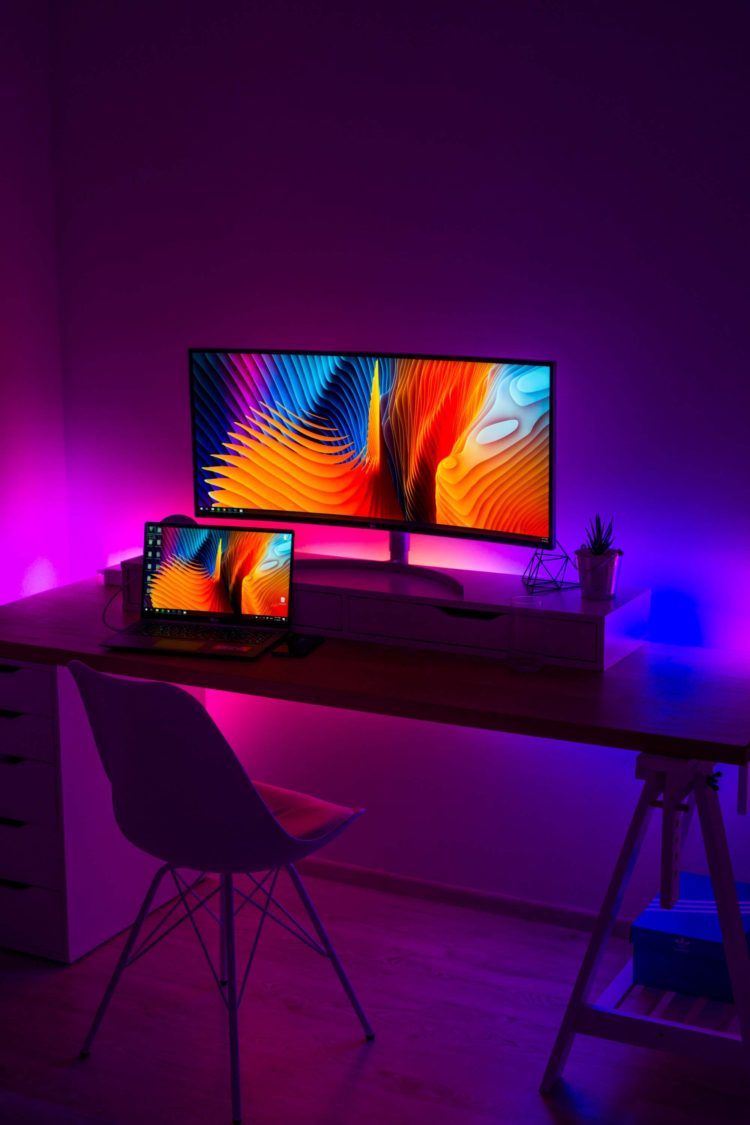 Light-emitting diodes (LEDs) emit light when an electric current passes through them. They’re mainly used as a lighting source for electronic equipment. The technology also applies to some devices that show various data types and display times.

In many cases, LED is also called full LED, while LED-Lit is also known as LED-backlit. To get things straight, LED-backlit technology is a location change of the cold cathode fluorescent lamps of full LED. While both systems are used in the emission of light, the main difference between the two is the position of the LED.

In LED-lit devices (such as a television), the LEDs are located on the device’s edges, while in full-LED devices, they’re located across the display and are spread evenly on a grid.

The seemingly minor differences between the two bring rise to many other disparities. Below is an in-depth breakdown.

Led vs. Led-lit Monitor – Which One is Better?

The screen brightness of the LEDs varies because of their location. Full LED devices have uniform lighting across their screens. This can’t be said about those gadgets using the LED-lit technique, whose lighting is somewhat nonuniform.

Full LED has a dimming feature; the technique allows for changes in the contrast levels, such as making green greener; you should consider having full LED electronics to be able to contrast the colors easily.

If you were buying a television, the lighting feature would be a consideration, and therefore full LED screen would be a better choice.

Energy consumption in Led vs. Led-lit.

Full LEDs generally produce more heat than Backlit LEDs; this causes a significant difference in the amount of energy these screens consume. If your budget allocation for electricity bills is quite tight, consider going for backlit LEDs.

Between led and led-lit monitors, which one is safe for the environment?

An environment-friendly device should be your ultimate choice. In this context, a Backlit LED uses less power than a Full LED, which consumes a lot of energy to light up. To reduce the environmental impact, you’d want to buy a LED-Lit monitor.

The price difference in Led vs. Led-lit

With these facts established, let’s now get deeper into the differences between LED and LED-Lit devices:

Brightness On The Screens

Liquid Crystal Displays (LCDs) are flat displays that use light modulating properties. There are only two methods used in the backlighting of LCDs: edge-lit and full-array backlighting.

Remember, the brightness of a screen isn’t a mere cosmetic issue. It goes a long way to ensuring eye comfort as you look at the content. For example, with a smartphone, you should be able to see and read texts from it. A uniformly lit screen makes reading a breeze, and the vice versa is true.

Presently, most technological companies seek to be ‘greener’ and participate in environmental initiatives. That should also be your goal as a user of technological gadgets.

Because of this, when you use Full LED gadgets, your digital footprint is relatively higher. And this contributes to adverse environmental issues.

For this reason, when considering purchasing either of the two, you’d want to be more mindful of the environment and choose LED-Lit devices.

Local dimming controls the LED brightness on various screen sections. Full LED monitors can achieve better contrast in comparison to Backlit LEDs. Local dimming allows for the illumination and dimming of the light source selectively to match the image requirements.

Modern portable navigation systems leverage this aspect of Full LED. To allow easy movements both at night and during the daytime, you need a device that can work under both lighting conditions. Full-LED makes this possible.

Location Of The LEDs And Number Of Leads

To reiterate, Backlit LEDs have their LEDs located on the sides of the monitors, whereas full LEDs have the LEDs spread all over the monitor. Thus, for a full LED television, the evenness of the lighting is smooth compared to a Backlit LED TV that relies on a diffuser to even out the brightness emanating from the edges.

Full LED and LED-lit are suitable for different applications owing to their strengths and weaknesses. Considering that LED-backlit contains well-illuminated pixels, their light appears far much brighter. For this reason, they’re an excellent choice for house and outdoor security lighting.

In contrast, full LEDs have excellent contrast efficiency. Therefore, the technology is very suitable for the transport industry, particularly for navigation and ensuring the safety of pedestrians on the road. Knowing this, when you buy an automobile, it’s essential to pick one that uses full LED.

Other general applications of LED lights include:

Generally, monitors that use backlit LEDs in their display are thinner compared to full-LED monitors. Note that Full LEDs require more material to hold dozens of lights at the backside. This isn’t the case with backlit LEDs. And that explains the difference in monitor thickness.

The thickness of a monitor is among the factors you should consider during a purchase. If you’re after sleek and extra-thin screens, then Backlit LEDs are your go-to option.

A device that considerably heats up poses a fire risk, especially if left on for long. In this sense, Blacklist LEDs could be said to be safer than Full LEDs.

Taking it further, Backlit LEDs last longer than Full LEDs. It’s not uncommon for the former to function properly for 100,000 hours.

Pros and cons of LED and LED-Lit

Both LED and LED-Lit electronics have their merits and demerits. No one can claim that either of them is better than the other. It all depends on what you’re after.

If your primary concern is longevity, you’re better off with Backlit LEDs. And if you esteem high picture quality and less eye strain, then Full LEDs should be your go-to option. If you want to play a part in environmental conservation and reduce your carbon footprint, consider getting LED-lit gadgets.

The list could go on and on. In a nutshell, both technologies have revolutionized the electronics industry immensely. Whatever your choice between the two, you’re bound to derive maximum entertainment and enjoy full-range functionality.

Can I Upgrade My Laptop Processor from i5 to i7? (Explained)

How To Remove The Js:Includer-bmf [Trj] Virus? (Easy Solutions!)

What Laptops Are Made in USA? (Examples)

How to Fix Windows Photo Viewer “Not Enough Memory”? (Solved!)