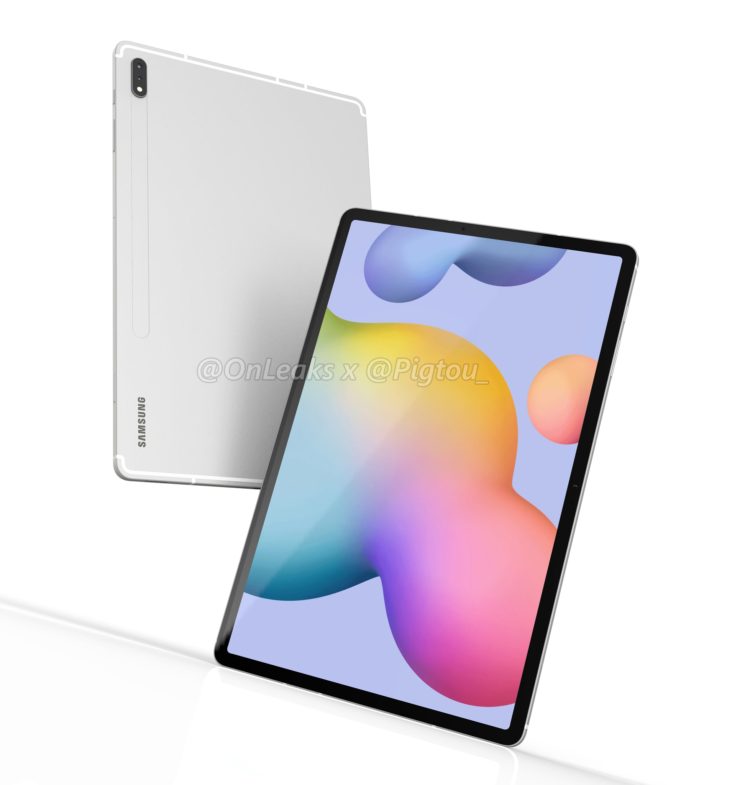 The larger screen bumps up the dimensions of this tablet by a bit. The Tab S7+ is roughly 285mm in length, 185mm wide and 5.7mm thick. The thickness goes up to 6.9mm if you include the camera bump. However, the Tab S7+ is going to be noticeably thinner than the Tab S7 and almost exactly the same as the 12.9 inch iPad Pro.

That makes sense, given that Apple is Samsung’s primary competition here. Even though Android tablets can’t really take on iPads or even Surface tablets, in terms of productivity.

While the Tab S7+ is the larger of the two, the design doesn’t change in any noticeable manner. You still get the two cameras on the back in an oval module and the Samsung logo placed parallel to the cameras on the back. In fact, in the photos it looks strikingly similar to the 12.9 inch iPad Pro from this year.

The bigger form factor gives this one a slightly more squarish form factor though, which might make it more difficult to use on the go. That said, it still works for watching movies on an airplane and many would appreciate the extra screen real estate enough to overlook the discomfort.

If you take a closer look at the photos, you’ll find that the SIM slot, volume rocker and power button on the left side of the device. There’s also a hole, which we assume will be a noise cancellation mic, on this side.

The screen is the obvious change in terms of specs. The Tab S7+ has a 12.4 inch display, which is just slightly smaller than the iPad Pro and not enough to make a significant difference in usability. You still get two cameras on the back and a third hole, which some say could be yet another camera, but that’s very unlikely.

While Apple may want its iPads to shoot lots of photos and help with Augmented Reality (AR), Samsung hasn’t shown such aspirations so far. Having said that, the company does have some AR software in its arsenal, so maybe a LIDAR sensor is going to make an appearance here too? We can’t be sure of that yet, of course.

You get Samsung’s S-Pen here too, and the front camera has been shifted to the side bezel so that it comes on top when the tablet is being used in landscape mode. The two tablets are also supposed to have 120Hz screens.

As mentioned earlier, the Tab S7 and Tab S7+ are expected to have 7760 mAh and 9800 mAh batteries, respectively.

Samsung usually keeps the Tab S series priced competitively alongside the iPads, so expect a similar price point. However, there are no details on that yet. The company is expected to launch the devices next month though.