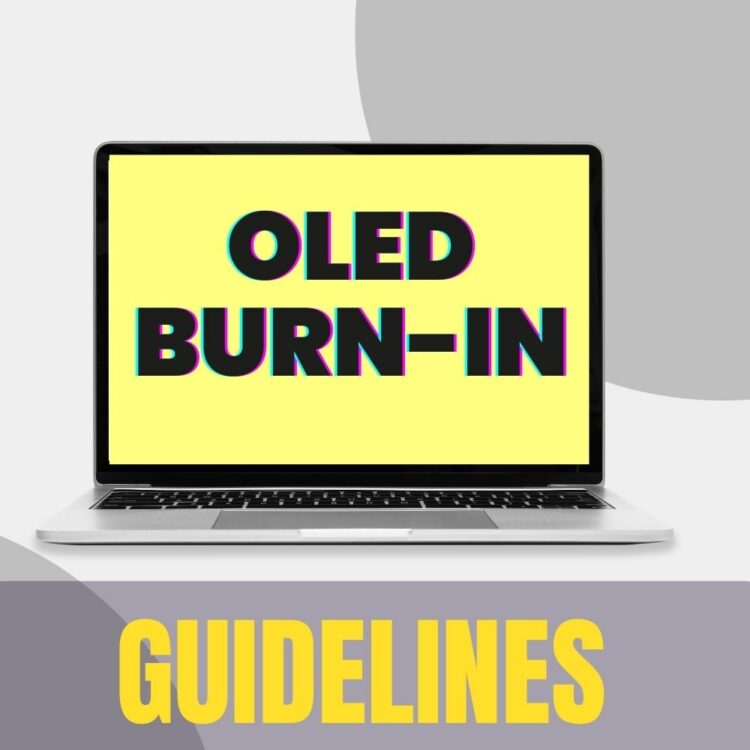 A laptop display that uses OLED technology offers the best picture quality but is more susceptible to burn-in than any other type of display. Even so, there are appropriate tips for resolving this problem.

Burn-In: What Is It?

On a laptop screen, burn-in occurs when specific images, navigation buttons, or persistent icons remain visible as ghostly backgrounds regardless of what else appears.

The issue of burn-in occurs when laptop screens made from organic light-emitting diodes (OLEDs) continuously retain images. Most of the time, this image retention disrupts the quality of pictures as well as videos displayed on the laptop screen.

Screens with OLED are quite easy to experience burn-in compared to the standard LCDs, also known as “liquid crystal displays.

The OLED Screen Burn-In Process: What Is It?

For laptop screens, OLED technology offers the best picture quality. The self-emissive pixels in this type of screen make this possible.

This means that the pixels on an OLED screen can generate their light visibility when an electric current or wave is passed through them. And so by that, it can produce top-notch picture quality.

Most “burn-in” associated with OLED is image retention, which ultimately goes away after a few minutes.

The image retention is made visibly long before it becomes a permanent burn-in. This implies that OLED burn-in is something to be aware of but not something to worry about entirely. It is resolvable.

How Can OLED Burn-In Affect My Viewing?

When laptop users face a continuous view that only projects part of an image, incomplete navigation buttons, or persistent icons on a laptop screen, it ultimately displeases viewing.

It also limits the screen view for performing certain key functions or tasks. Moreover, it brings about the reemergence of a fixed image on the screen for an extended time. Such inconvenience poses difficulty in the proper usage of your laptop.

How Long Does It Take For Screen Burn-In To Appear?

OLED screen burn-in have no specified amount of time it could last on your laptop screen. In some cases, the burn-in could stay within 2–3 weeks. It depends on how long the still image has been on the screen.

Also, high or maximum brightness greatly increases the chances of an OLED screen burn-in. And by that, there is the possibility of a long screen burn-in.

Is Screen Burn-In Permanent On Laptop?

OLED screen burn-in is resolvable and, as such, is not entirely a permanent screen issue. However, there are grounds where a user could leave an image on their screen for too long, which eventually results in the pixels of the OLED struggling when switching to a different color.

Organic light-diode screens(OLED) could have a burn-in, which can be permanent. Such arises from a display hardware defect rather than a software graphics or display driver issue.

How To Ascertain A Laptop With OLED Burn-In

It involves touching the screen shifts between colors, patterns, and alignments, Once a persistent image impression, or blotchy coloration, is spotted consistently. Then, it can be understood that such a user has a burn-in on his laptop.

Guidelines On How To Fix OLED Screen Burn-In On Laptops

Although most laptop monitors are designed to be less frail to burn in, there are chances it can still happen. Crucial factors, which include time, screen brightness, and other defaults, can cause burn-in, but the circumstances are different for each display technology.

The concern with OLED lies with the screen display. For laptops with OLED display, it gives great displeasure whenever there is a screen burn-in.

However, if such occurs, there are a few things that can be done, and they include the following:

Turn off the screen display.

The fundamental step to fixing an OLED screen burn-in is to turn off the screen display for at least a few hours. This step could extend for as long as 48hours or more. It provides the OLED pixels enough time to erase the burn-in image.

Make Use Of a White Screensaver

After completing the first step, setting your screensaver to a pure white image or background is next. This should last for a few hours. Essentially, this procedure may not remove image retention entirely, but it should reduce how visible it is.

Employ The Use Try JScreenFix

Repairs with JScreenfix can be used to handle screen burn-in with LCD and OLED.

For the use of the JScreen fix, there is no need to install anything. JScreenFix uses HTML5 and JavaScript in the web browser of your laptop.

An advantage of JScreenFIX is that it is easy to use. And, there are no fee charges for using the JScreen fix.

How To Prevent Screen Burn-In

In a bid to enjoy the best picture quality that OLED display offers, screen burn-in should be avoided at all times. There are preventive measures that should be adhered to. Measures such as the following:

Make use of full-screen immersive mode.

It is advisable to use immersive mode on your laptop screen. This mode helps to hide notifications and update flyers and navigation bars while using certain apps.

Despite modern display technologies being less susceptible to screen burn-in than they once were, few screens are immune from it. For example, a laptop screen made from OLED easily filters burn-in. While such issues are not unfixable, they can be addressed and restore picture quality.

What Does CTRL+WIN+SHIFT+B Do to Your Graphics Driver (Quick Guide!)