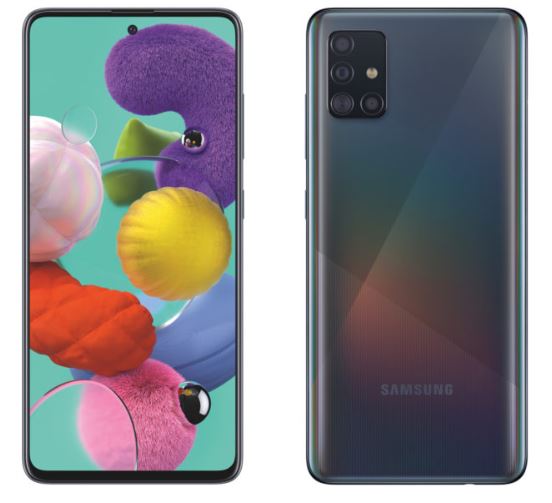 Recently, Samsung launched its latest Galaxy A series smartphone called the Galaxy A51 in the US. So far, the phone was only available from a couple of telecom operators including Verizon Wireless and Sprint. Now, Samsung has expanded the availability of the Galaxy A51 in the US by selling it through more channels. The handset can now also be purchased from AT&T and Comcast’s Xfinity Mobile.

The Galaxy A51 price is set at $399 and you can also buy the phone through instalment plans from both AT&T and Xfinity Mobile. While the former isn’t running any offer on the phone, you can get a discount of $100 from Xfinity Mobile with its 24 months instalment plan. Both are offering the handset only in a single Prism Crush Black color variant at the moment. In other markets, the phone is also available in Prism White, Prism Blue, and Prism Pink color models.

Samsung Galaxy A51 specifications and features

For the uninitiated, the Samsung Galaxy A51 is the successor to the last year’s Galaxy A50. The phone is a mid-range offering with an almost bezel-free display, a punch-hole design, an in-display fingerprint sensor, and a quad primary camera setup on the back. The smartphone has non-existent bezels on the sides and top, and a slim chin to provide a large screen estate.

Coming to the specs, the Galaxy A51 features a 6.5-inch Super AMOLED Infinity-O display bearing a resolution of 1,080 x 2,400 pixels. The screen is protected by a layer of Corning’s Gorilla Glass 3. Powering the smartphone is the brand’s in-house octa-core Exynos 9611 processor, which offers a maximum clock speed of 2.3GHz. Under the hood, the new Galaxy A series handset houses 4GB of RAM and 128GB of native storage, which users can further increase up to 512GB by inserting a microSD card. Software-side of things on the Galaxy A51 are handled by Android 10 with the One UI 2.0 on top.

For imaging enthusiasts, the Galaxy A51 offers a 48MP primary camera on the back with Super Steady OIS mode for smooth video recording. The main shooter is aided by a 12MP ultra-wide angle shooter and a 5MP depth sensor. There’s also a fourth 5MP camera onboard for depth-sensing capabilities. The device is capable of recording 2,160p videos at 30fps and 1,080p at 30/120fps. As far as the selfies and video calling purposes, the handset has a 32MP camera on the front, which is located in the hole above the screen. The front camera of the device is capable of shooting 1,080p videos at 30fps.

As for the other features, the Samsung Galaxy A51 has a single bottom-firing speaker and Dolby Atmos sound. The handset is equipped with a 3.5mm headphone socket, which is located alongside the charging port at the bottom. In terms of connectivity, the device offers 4G LTE, dual-band Wi-Fi, Bluetooth 5.0, A-GPS with GLONASS, and USB Type-C port. Lastly, a massive 4,000mAh battery with support for 15W fast charging keeps the whole show running on the Galaxy A51.

Can You Use an iPhone in a Sauna? (Real Life Experience)

How do Companies Dispose of Office Laptops? (Explained)